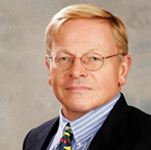 T.J. Rodgers—along with Fred Jenne (R&D), Mike Starnes (wafer fab), Lowell Turriff (sales), Fritz Beyerlein (assembly) and Steve Kaplan (engineering)—founded Cypress Semiconductor in December 1982 and led it to a public offering 29 months later in May 1986. Rodgers served as Cypress’s CEO for 34 years until stepping down in August 2016 as the longest-tenured CEO among all publically-traded technology companies. He is the former chairman of the Semiconductor Industry Association and of SunPower Corporation, a small company on the ropes that he saved in 2001 with an emergency Christmas-time $750,000 check, now the second-largest solar energy company in revenue worldwide. He currently serves on the boards of two other energy-related private companies: Bloom Energy, the world’s most prominent fuel cell manufacturer and Enovix, a company that integrates lithium ion batteries into silicon wafers.

Rodgers was a Sloan scholar at Dartmouth, where he graduated in 1970 as the Salutatorian of his class with a double major in physics and chemistry. During his tenure at Dartmouth, he received eight formal citations from his professors. At graduation, he won the Townsend Prize and the Haseltine Chemistry-Physics Prize as the top physics and chemistry student in his class. He later served on Dartmouth’s Board of Trustees from 2004 to 2012, endowed two chairs at the College and currently holds the title Trustee Emeritus.

Rodgers attended Stanford University on a Hertz fellowship, earning a master’s degree in 1973 and a Ph.D. in 1975, both in electrical engineering. Just one electrical engineering course taken in his last term at Dartmouth changed his life. He gave up his fellowship in the Stanford physics department to pursue integrated electronics. His eventual thesis advisor, Professor J.D. Meindl, hired him as a lab assistant, so he could afford to remain at Stanford. In return, Rodgers now supports a Stanford electrical engineering graduate student every year through a special endowment.

At Stanford, Rodgers invented and patented a unique v-groove MOS silicon chip technology dubbed “VMOS.” “In those days,” Rodgers said, “we personally made integrated circuits—performing every step by hand, even mask making.” After receiving his Ph.D., despite direct recruitment by Intel’s Gordon Moore, Robert Noyce and Andy Grove, Rodgers chose to join rival American Microsystems Inc. (AMI) because it committed to commercialize VMOS technology. His technical papers on VMOS twice won the Best Paper award at the IEEE International Solid State Circuits Conference, the premier conference in the field of integrated electronics. He managed the MOS memory design group at AMI from 1975 to 1980, but VMOS technology was ultimately flattened by the Moore’s Law juggernaut. “My first job was a five-year, $25 million bust,” he said, “but I followed legendary coach Vince Lombard’s advice: ‘Learn from failure. You may learn more from failure than you do from success.’”

Rodgers chose to move on to Advanced Micro Devices (AMD) to learn more about how to run a business in an iconic Silicon Valley company run by maverick entrepreneur, Jerry Sanders. He ran AMD’s Static Random Access Memory (SRAM) group until co-founding Cypress. Rodgers continued to pursue SRAMs, the very high-performance memories that interface directly with microprocessor cores, as Cypress’s first product. Today, Cypress is No. 1 worldwide in the SRAM market, with 46% market-share and 39% pretax profit.

The 2016 version of Cypress is a 7,500-employee, $1.8 billion international semiconductor solutions supplier with No. 1 worldwide market-share rankings not only in SRAMs, but also NOR 1 of 4 flash memories and the combined market for automotive microcontrollers and memories. Cypress is also a leading supplier of chips for the nascent Internet of Things (IoT) market, with its position greatly augmented by the recent acquisition of Broadcom’s IoT business unit, Cypress’s 29th acquisition, during his tenure.

During Rodgers’ tenure, Cypress raised a total of $4.38 billion from the market, composed of funding from venture capitalists ($40 million), an IPO and secondary offering ($118 million), and convertible debentures and other debt instruments ($4.23 billion). During the same period, Cypress returned $8.50 billion to shareholders in the form of stock repurchases ($4.00 billion), debt repayments ($1.48 billion), dividends ($425 million) and the SunPower spinout stock dividend ($2.60 billion). “We have paid back all of our startup investments and put back an extra $4.12 billion to the market,” he said.

Rodgers holds 20 U.S. and multiple foreign counterpart patents, including those for Cypress’s “Autolines,” robotic chip assembly-and-test machines that replace the need for three separate manufacturing areas by converting raw wafers into packaged, marked, tested units on one machine in 10 hours. He also holds a key silicon processing patent for the “air-gap” dielectric scheme that improves transistor speed, using a process that has been widely adopted by the semiconductor industry. Based on his technical accomplishments, Rodgers was inducted in 2005 into the Silicon Valley Engineering Council Hall of Fame, joining prior awardees Steve Wozniak and Gordon Moore.

Rodgers has testified before Congress five times. A life-long proponent of free markets, he twice testified for the elimination of corporate subsidies, including those for the government-funded Sematech consortium that he called “welfare for the rich.” In 1990, he testified against granting an antitrust exemption to the government-funded U.S. Memories cartel, opposing Gordon Moore’s testimony, as well as the position of the semiconductor establishment—an act that put him on the cover of Business Week magazine with the title, “Bad Boy of Silicon Valley.” Rodgers has been a steadfast supporter of immigration, arguing before Congress that wealth can only be created by human beings and that bringing more talented engineers into the U.S. on special visas would add to, not subtract from, the average American’s economic well-being.

Rodgers’ testimony—and his other contributions to national business and news publications—are available on the www.tjrodgers.com website. His writings on free markets earned him an honorary Ph.D. in 1999 from the Universidad of Francisco Marroquin in Guatemala, where he joined a short list of prior recipients including Milton Friedman. One of Rodgers’ most prized possessions is an unexpected letter from Friedman, congratulating him on a Wall Street Journal editorial that castigated corporate welfare, a.k.a. “government-industry partnerships.”

Rodgers was the first CEO to volunteer to lead the annual food drive for Silicon Valley’s Second Harvest Food Bank (SHFB), an essential charity that converts 95% of donated funds into food for people in need. Cypress has won the SHFB’s highly contested corporate award for the most pounds of food donated per employee for 20 consecutive years, ever since the award was 2 of 4 created. Cypress EVP Dana Nazarian and ex-EVP Norm Taffe are now on the SHFB board of directors.

Kathy Jackson, the CEO of Second Harvest Food Bank said, “T.J. Rodgers convinced the board of Cypress Semiconductor to donate one of Cypress’s buildings for a critically needed food distribution center in 2011. It nearly doubled our capacity, allowing us to distribute more fresh fruit and vegetables than any food bank in the U.S. In 2010 Cypress and SunPower donated a solar panel array that saves us nearly $100,000 per year in energy costs. T.J. Rodgers has always been the first call I make—whether for financial support or for hard-headed business advice—and he always responds.”

In 2007, Rodgers received the Star Award for Extraordinary Support of the California Alliance of African American Educators (CAAAE), an organization with great success in advancing the education of African American students in science and technology. In addition to funding, Rodgers and Cypress supply CAAAE students with computers and meeting space to help focus the group’s limited funds on its mission of education. Rodgers recently endowed a CAAAE trust fund with Cypress stock that will pay out tax-free dividends to provide continuous support in the future.

Debra Watkins, the founder and president of the CAAAE said, “While releasing diversity data is in vogue today, Dr. T.J. Rodgers and Cypress Semiconductor have been investing in African American education for nearly 20 years by supporting CAAAE scholarship programs. Our Greene Scholars Program sends 100% of its students to college, 90% graduate in four years with BA or BS degrees, and 60% of those degrees are in STEM fields. These results are about eight times better than the national average for Black students. Because of T.J.’s unparalleled support, we will honor him with our STEM Champion of Diversity Award at our upcoming 15th anniversary ceremony on Oct. 22, 2016.”

Rodgers’ personal interests include attending two movies per week and reviewing the reviewers of movies, for whom he has a great disdain. He also likes cooking, especially Italian, French, and Chinese cuisine; collecting wines, notably French burgundies; and advising his wife, Valeta, on running their winery, Clos de la Tech, in its mission “to produce the Best Pinot Noir in the New World.” In 2010, well before the phrase “Internet of Things” was popularized, Rodgers personally designed, built and donated 152 state-of-the-art, IoT-connected research fermentors to the U.C. Davis Department of Enology and Viticulture, which he considers to be the best in the world. The automated fermentors report fermentor temperatures and Brix (sugar content) that Rodgers can monitor from his office. Rodgers is currently working with U.C. Davis on applying electronic technology to the scientific watering of crops. 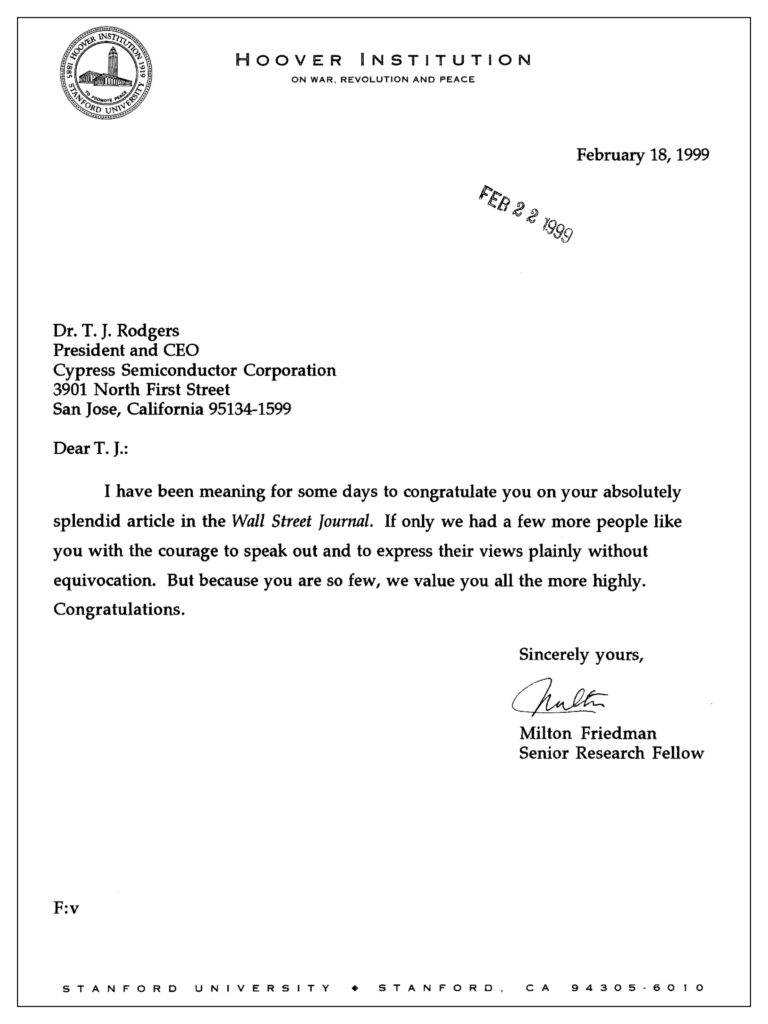